“There’s just nothing in the world like a reusable canvas bag filled with organic kale, locally produced honey and cruelty-free artisanal cheese.”

As we all know, white people really like farmers’ markets.

Jenny and I like them so much, apparently, that we drove 45 minutes to suburban Johannesburg to experience the Bryanston Organic Market. 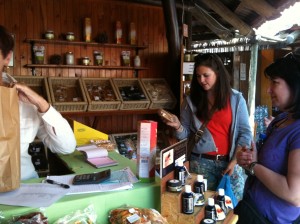 And not the same.

We are, of course, in South Africa, so the dynamics are somewhat different. But the fact that it did feel like we could have been anywhere in the world is, perhaps, the most notable observation we can make. Here’s why:

With the exception of universals like shopping malls, traffic lights, odd university architecture and overpriced breakfast cereal (a box of Honeycomb goes for about $10.00 at Pick ‘n Pay), the vast majority of life here is uniquely South African. Everything comes with a mzansi twist. However, had there been stick juggling or hacky sack at Michael Mount, I would have been hard pressed to tell you whether we were in Asheville, Boulder or Corvallis. Or Johannesburg.

All of this is not to say the day wasn’t incredibly fun. It was. Joined by new friends and fellow Fulbrighters Anna and girlRyan, we meandered Michael Mount for the better part of three hours, sampling goat cheeses, buying black beans and gorging on savory and sweet pancakes. It was enough to make us repeatedly say, “Good times…” in our best NPR voices.

And it was enough to justify “Farmers’ Markets” as the #5 item on the list of stuff white people like.

I’m certain we will be back.

(Coincidentally, the first draft of this post was written in something else that white people like: a Moleskine notebook.)

One thought on “Stuff White People Like: Driving 45 minutes to suburban Johannesburg for an organic farmers’ market”