In Copenhagen, Denmark, in the southeast of the city, in a former military barracks, is the uniquely Danish community of Christiania. Famous for its autonomy, communal lifestyle, creative “architecture without architects” and, yes, Pusher Street – where the open sale of hash and marijuana was legal until 2004 – Christiania is proud of its über-progressiveness, even as it sits ensconced within arguably one of the world’s more progressive countries.

While difficult for a foreign observer to truly comprehend, Christiania looks, acts, feels and is different than the rest of Copenhagen, than the rest of Denmark, than the rest of Europe. If you didn’t get it by walking through Pusher Street, visiting the bike shop or staring in wonder at the murals, the signage as you exit Christiania spells it out for you: Whereas you are welcomed to Christiania on the way in, you are reminded that “You are now entering the [European Union]” on the way out. Make no mistake.

Living where we live now in Pretoria, it often feels like we passed under that very sign and entered the EU. Our daily lives are quasi-European, filled as they are with tea breaks, email, Nutella, hot showers, television and virtually all other trappings of modern life in London, Ljubljana, Cardiff or Copenhagen.

Looking at places like Sandton in Johannesburg and the V&A Waterfront in Cape Town, as well as World Cup-legacy enhancements like the ultra-modern Gautrain and beautiful new roadways, one could argue that the signs at OR Tambo International Airport should read:

With a (relatively) stable democracy, progressive constitution and comparatively high (and generalized) standard of living, South Africa often does not have much in common with many of its African neighbors.

Except when it does.

Just travel west of Pretoria to Atteridgeville, or east to Mamelodi, or north to Soshanguve, or south to Tembisa and you will quickly find yourself in the version of Africa experienced by too many on the continent, the version that westerners see on the network news, the version that pleads for us to forego a cup of coffee today so that a starving child can eat for a week.

But let’s not paint it in such dire terms.

For example, as part of Jenny’s Birth Month (one day is not enough), we celebrated with our university-provided housekeeper and friend, Ephney, and her family and neighbors in Mamelodi. They live in a shack squeezed between thousands of similar shacks on a narrow, undulating dirt road. Is it ideal? No. Do they want to live someplace nicer? Surely. Are they some of the happiest, most welcoming, proudest, most sincere, most gracious people you’ll ever meet? Yes, every one of them. Mamelodi is like that; it is at once deeply disheartening and profoundly uplifting. 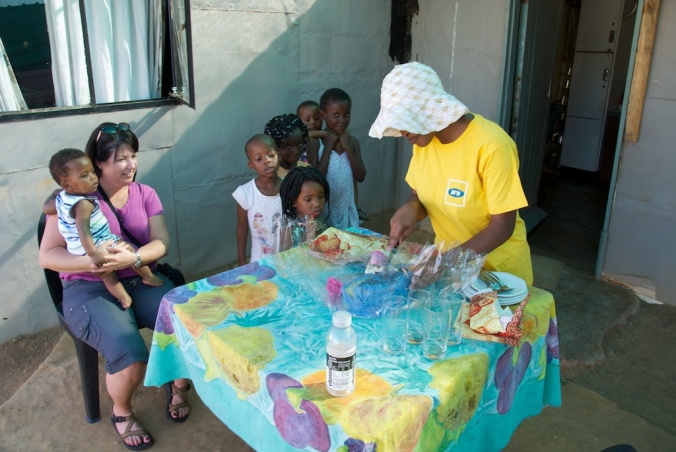 Not long before, I had the great fortune to visit the Tembisa area – specifically Ivory Park – with our Fulbright buddy Hannah. She and her husband, Bob, along with a dedicated group of Dutch and South African superheroes, have been working to improve the quality of life for kids, adults and seniors in Ivory Park for the last several years. 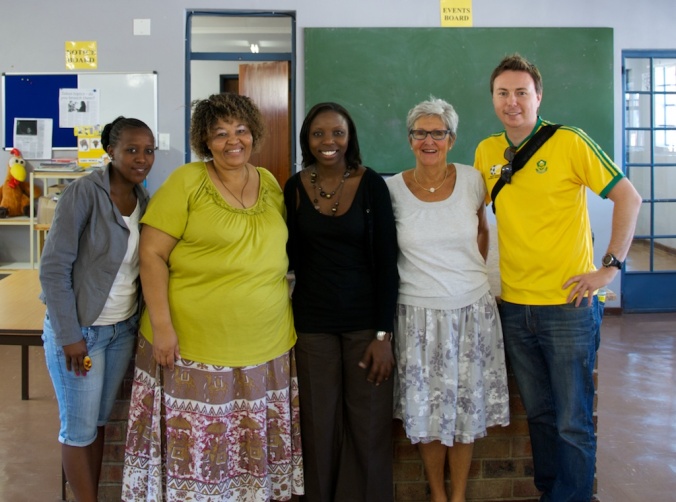 With the some of the superheroes of Ivory Park

My inspiring visit to the school, library, senior center, eye clinic and daycare/preschool deserves its own post, and it shall have one, but let me just say this:

That there are still millions of people in South Africa who must live in tin shacks with no electricity, no running water, no toilet, no heat, no aircon, and no real hope of anything different seems completely incongruent with the promises and expectations set forth by the post-apartheid government. The country has the money, it surely appears, but chooses to spend it elsewhere…like on a R170 million ($21 million) renovation project at the presidential residence. Meanwhile, millions of the president’s constituents literally don’t have a pot to piss in.

A Land of Contrasts

Among the first observations we shared on this blog was that South Africa – like so many places – is a land of contrasts. There are beggars in Brooklyn, giraffes in Groenkloof and Mercedes in Mamelodi.

Perhaps we should now add that there is Africa in “Africa Lite.”

My visit to Ivory Park, more from Jenny’s birth month, and some photos of Purple Pretoria’s Jacaranda Explosion.

*We are by no means the first to coin the term “Africa Lite.” While applied here to South Africa, which was my only known reference, it has been used to describe other countries, as well, including Botswana, Uganda and Rwanda.

4 thoughts on “Welcome to “Africa Lite””