A ticking clock is a right good motivator. It prompts desperate online auction bids. It demands quick thinking on game shows. It signals that the bomb is about to explode.

It sends us sprinting to Mozambique.

Actually, the decision was much less dramatic. Sitting on the couch after dinner one night, Jenny simply turned to me and said, “Why don’t we just go to Mozambique for the weekend?” We looked at each other, in silence, each of us contemplating what should have been an outlandish question. Then for another hanging moment, as we shared the unspoken realization that only now, with our days in South Africa tick-tick-ticking away, could we even contemplate such a whim.

From that point, the only real decision to make was whether to drive or fly. The capital, Maputo, is an easy, 6.5-hour drive on the N4 from Pretoria. But, driving from South Africa with a South African vehicle can lead to trouble, particularly in the form of informal road blocks, sometimes set up by legitimate police officers, seeking bribes, etc. Not only did that not sound like fun, we were concerned that something might happen that would jeopardize the pending sale of our car.

So, we decided to fly.

A 45-minute flight dropped us in Maputo, where we waited in a short queue for a visitor’s visa, complete with our photos on them. It was much easier than our ordeal in Addis Ababa (sorry, Melhik and Adem, Abeba). From there, it was off to the Polana.

The Polana Serena Hotel is a colonial era structure long considered to be one of the finest hotels in Africa. It took a beating and endured neglect during the conflicts that engulfed the country through the eighties, but has been restored recently to reflect its past, but with some decidedly modern touches.

That afternoon, a Friday, we left the hotel on foot to explore a bit of the city. We walked down Avenida Julius Nyerere (named for the first president of Tanzania), along Avenida Friedrich Engels, through a park and on to a little sidewalk café, where we ordered a platter full of grilled prawns and a small pitcher of sangria. Then, another. Mozambican seafood was living up to its billing.

Saturday, we had bigger plans. Well, not really. Vacation, after all. But we did start after breakfast with a tuk-tuk ride down to Avenida Guerra Popular and Mercado Central. Before I wisely take a break and let the pictures do the talking, do yourself a favor and look up a map of Maputo, just for the street names. 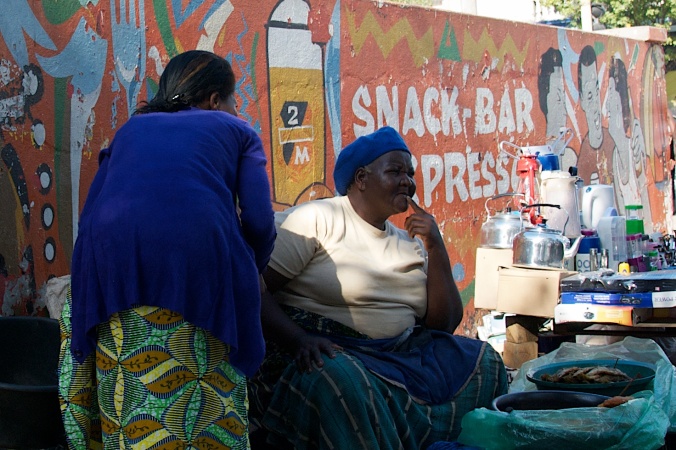 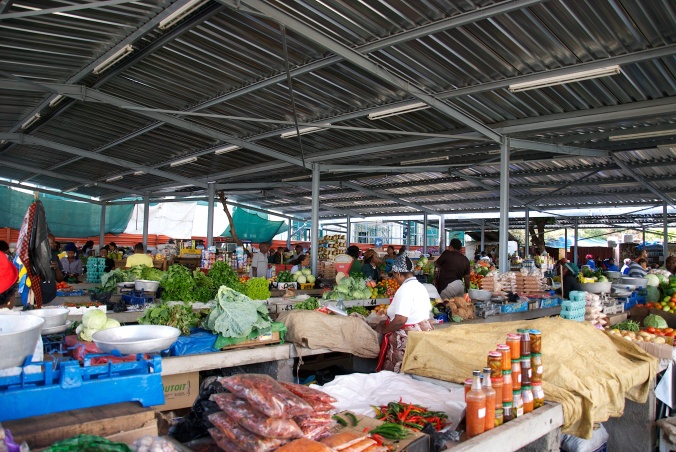 Despite visiting a number of hard-sell markets like the ones in Maputo, such as at Merkato in Addis, Thamel in Kathmandu or Silom in Bangkok, I still find the experience to be exhausting. “No, I really don’t need a dirty jar of nuclear-hot piri piri sauce, thanks. I just paid twice as much as I should have for a t-shirt…I think I’m done.”

To the hotel pool, please.

Dinner on Saturday night was at a restaurant called Zambi. Nice garlic bread, white sangria with what seemed to be a cinnamon sapling in the bottom of the pitcher, and pretty decent TG prawns and langoustines. Nothing to write home about. We should have gone to Costa do Sol. Next time.

Sunday: Jenny jogged, we ate breakfast outside with a nice view of the Indian Ocean, then we walked to a permanent craft market across from the hotel. In addition to the usual stuff – tribal masks, cloth dolls, beads to make beads, wooden elephants that “my blind uncle just carved yesterday, my brother” – there was a young dressmaker displaying some really incredible work. Jenny was hooked.

Speaking of hooked, after the craft market, things got a little fishy. A lot fishy, actually.

As to be expected at Mercado de Peixe – the Maputo fish market. 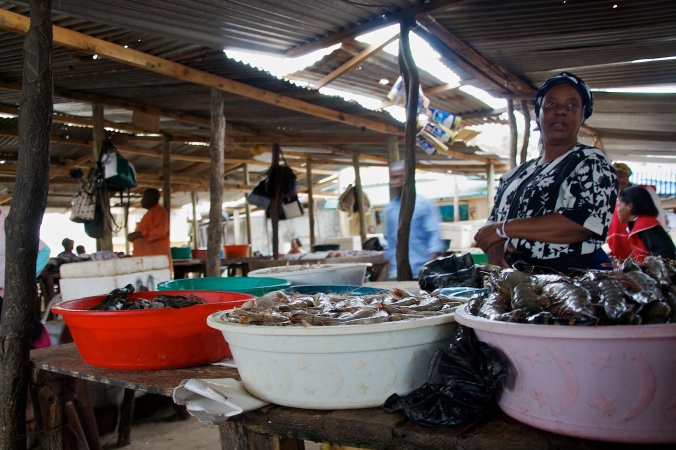 Tubs of lobster and prawns at Mercado de Peixe, Maputo

The real attraction of the fish market is that you can shop for fresh seafood – LM prawns, lobster, snapper, you name it – then take your catch to one of the restaurant stalls behind the market and have it grilled on the spot. After negotiating prices for a nice lobster and three LM prawns, we paid, sat and waited for lunch to arrive. Decadent.

Yet, even as we pulled bite after delicious bite of succulent, white meat from the shells, we could hear the clock ticking. Tick! We must hurry to the airport. Tick! We must finish our projects in Pretoria. Tick! We must pack our bags for home. Tick! We must leave our life in South Africa.

And it just keeps getting louder. Things are about to explode.