Yesterday, one of my colleagues, a young woman from Zimbabwe named Joy, asked me about ten gallon hats, cowboys and John Wayne. While her inquiries were clearly in jest – the mock-galloping gave her away – I really wasn’t surprised by the questions. As strangers in a strange land, we’ve become popular targets for interrogation.

This is despite the fact that (the very best of) American culture is regularly imported here by way of B-grade Hollywood films, sitcom reruns and Royales with Cheese. The opportunity to grill a real, live American about anything from the supposed superiority of Starbucks to driving on the other side of the road to “Why do your Republicans talk so much about ‘freedom’ when they insist on taking it away from women/minorities/immigrants/gays?” is often too difficult to resist. Shame that we still don’t have good answers.

Without conducting the scientific research necessary to confirm, I’d say that the two questions we get most often are these, and I quote:

The first question, you must understand, is not meant to be rude. We like to think of the phrase “you people” less as an arbitrary, disdainful lumping and more as a term of endearment. As if the word wonderful was accidentally omitted. Still, we’ve been getting the question for the better part of six months now …

As for the rugby question, until recently, we could not supply a satisfactory answer. While we became avid supporters of the Springboks during the Rugby World Cup last year, we couldn’t see one of those matches in person because, well, they were all in New Zealand. Now, however, all attention is on the Super Rugby league, and we have our own team here in Pretoria: the unfortunately named Blue Bulls.

It was time to see the rugby.

Thanks to the gracious organizing efforts of Quintus and Christa Smit, their daughter, Marni, and Marni’s boyfriend, Giancarlo, we scored tickets to a Bulls v. Crusaders match at Loftus Versfeld Stadium.

Loftus during Blue Bulls matches is informally, yet fittingly, known as the “Taal Kraal.” Taal is the word for “language” in Afrikaans, and kraal is the word for “corral.” In essence, by going to a rugby match at Loftus, one is effectively surrounded on all sides – corralled in, as it were – by Afrikaans. And I mean Afrikaans Afrikaans. The Boers love themselves some rugby! And they love to talk about it. In Afrikaans.

Don’t get me wrong, we understand why people like the sport. I enjoy the strategy, something I learned to appreciate while watching and discussing World Cup matches. (As it happens, the match we saw featured several players from the Springboks side, as well as the All Blacks, as the Crusaders are from New Zealand.) Jenny, bless her, loves the muscular men with the thick thighs. When she spotted Victor Matfield, I thought she might rush the pitch and hurl herself into his arms, nuzzle his werewolf beard. Never mind that he is actually retired and his appearance was as a business-suited sideline reporter. 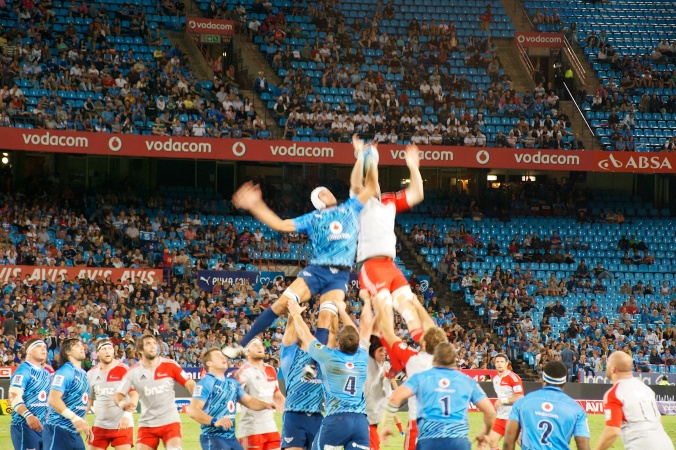 Blue Bulls & Crusaders players compete for the ball during a lineout. (not pictured: Victor Matfield)

But, the point is, rugby – especially Blou Bulle rugby at the Taal Kraal – is a white thing. I think fellow American Ryan Brown said it best:

… don’t let Invictus convince you otherwise: rugby is whiter than a Wilco concert and always will be.

At least we people got to see the rugby before we left.

WARNING: This post gets slightly NSFW towards the end…

As Americans who speak only one of the 11 official South African languages (English), you could argue that we are missing out on 90.9% of the national conversation. Of course, that’s not precisely accurate. Or, it is, depending on how you figure it (I’ve never been good at math, or “maths,” as they say here).

On the one hand, it is true that despite our best (feeble) efforts to learn Afrikaans (Jenny), seSotho/Nguni (Ryan), or any other local language (Indie does respond favorably to the word Zulu), we are basically only able to operate in English.

And this, one would think, on the other hand, should be fine. English is, after all, the de facto language of commerce, navigation, and (for the most part) politics. However, as we have detailed here, here and here, South African English is different enough from American English that it can – at minimum – cause confusion, or – in some cases – demand a double-take, or – in the extreme – trigger a face-twisting sort of cringe-wince-smirk that encapsulates the usually disparate feelings of embarrassment and hilarity.

OK, to be fair, there are really no truly squirm-worthy moments in normal conversation. Unless, that is, we have a momentary lapse and ask a waitron for a napkin (which here means diaper or feminine napkin) instead of a serviette.  What we see more often are unfortunately named brands, shops and restaurants that, while in English, must have much different – and more innocent, perhaps – connotations in South Africa.

Let’s start with some of the more innocuous examples:

And then there are those that are a bit more scandalous:

I’m sure there are more examples, but I doubt any can beat the final entry here. We will be on the lookout, nonetheless. We do it all for you…it’s only for you.

So, yesterday morning I was at the Ethiopian Embassy in Pretoria to apply for visitors’ visas. After I signed in at the security gate, I could tell that the security guard needed to wand me to check for weapons, priceless krugerrands, etc. Like most embassy guards, he was a black South African. Seeing me as a white person in Pretoria, he started speaking to me in Afrikaans.

“Yep. I’m an American,” I blurted, for some odd reason, as if that fact would somehow help me at the Ethiopian Embassy.

“You’re an American? Then where is Jay-Z?”

“Sorry?” I stammered, thinking he couldn’t have just asked me, a weird-looking white dude standing at the gates of the Ethiopian Embassy in South Africa, the whereabouts of Jay-Z.

“Where is Jay-Z?” he quizzed me again, smiling broadly.

“Uhhh…I guess he’s in Brooklyn?” I tried. And as soon as it came out of my mouth, it dawned on both of us that we were standing in Pretoria’s Brooklyn neighborhood, meaning that Jay-Z was, indeed, in Brooklyn and not in Brooklyn at the same time.

We had a laugh. I went inside.

If only my conversation inside had gone as well…