Hi there. Me again. Been a while.

To tell you the truth, it’s been difficult to sneak to the computer, what with Dad home all the time. (I don’t think he’s really working here; he just looks at Kentucky basketball and Notre Dame football – are they still relevant? they haven’t won anything in my lifetime – on ESPN.com and reads weird books.) But today he said he had a “lunch meeting” and was going to the grocery store afterward. Thank god. It’s pretty freakin’ bare around here with Mom gone. Besides, something in the fridge reeks! I think it’s the milk. I don’t know how he does it.

Anyway, not the point.

As you may have noticed, we moved. I have a yard again! It’s awesome.

In many ways, it’s even better than the yard I once had in suburban Chicago. I can go in and out the front or back doors – it’s all fenced. If, for example, I’m in the backyard sunning myself on the patio when my friend Ephney comes to clean, I can dart in through the back door, cut across the living room and burst out the front door to greet her.

The other person who comes over a lot is Jabu. He’s the gardener. I was unsure of him at first. He’s tall, and wears a uniform. I don’t like uniforms (see mailman, UPS man, meter reader, et al.). But I like him now. Don’t get me wrong, I still bark at him now and then, but I also make him pet me and stuff.

What’s not awesome about the yard is that it attracts interlopers. The crazy, African kind. Wild animals not worthy to share in my sophistication.

The birds…I can’t do much about the birds. They mostly stick to the trees, but sometimes they bounce around the yard, pecking at the dirt. I already ate the chicken bones, weirdos! I have no bloody idea what they’re looking for.

Once, a couple of especially noisy chicks flew down and hopped their way through the patio door into the house. I was like, “WTF?!” I had to send a clear, unforgettable message that day.

For a while after we first moved, an old, once-white-now-dirty-gray cat tried to post up on me. Do I look like Brian Scalabrine? Chris Dudley? Rodney Dangerfield? No respect. Jeez.

I had to tell that tongue-bather where to go one day, boy. Here, I actually uploaded a video to prove it. Give it a minute…there’s an epic staring contest before the payoff. 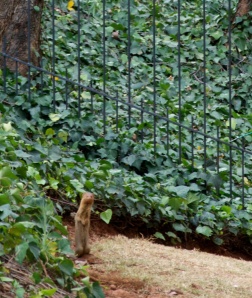 OK, yeah, so you can stand on your hind legs...You're still a MONGOOSE!

As if a cat wasn’t bad enough, we now have a…what’s it called? Mongoose? Right, a mongoose living in the backyard. The other day I caught it climbing up the inside of the downspout. It was looking for tiny lizards, apparently. I ran it off a couple of times, but it keeps coming back. It’s hiding somewhere in the ivy now, sneaky bugger. I don’t trust it.

So, while they’re likely not reading this, the cat or the mongoose, if they are I want to tell them to STAY OFF MY LAWN!