On Sunday afternoon, Jenny and I drove over to the Groenkloof Nature Reserve, a game sanctuary established by President Paul Kruger in 1895. Since we live on the University of Pretoria Groenkloof Campus, the reserve is quite literally within sight from our flat. Crazy close. 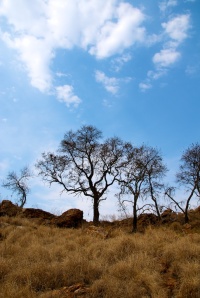 We paid our R50 ($7) and parked, and decided to tackle the 4.0 km White Trail, one of three marked paths within the reserve. The first 40 minutes of our walk was dominated by guinea fowl — there was a cluster of about 20 birds on the trail in front of us, and each time we got near them they simply scooted further along the trail. The scenery itself was beautiful, though, and sections of the trail seemed very “African bush,” even though we were still technically in the city.

As we crested a hill, we came upon a thicket of tall grass and stones, almost like an island between the walking trail and the nearby mountain bike paths. Walking past the coppice, Jenny commented that “If I were an animal, I’d be hiding in there.” Sure enough, as we turned around to laugh about it, a half-dozen springbok stalked out of the brush. Seeing us, however, they turned right back around and hid. Like Jenny would, if she were an animal.

We managed to spot several more buck (or bok) on the White Trail, including some young male and female kudu and a herd of impala. The impala dashed away through the bush before I could snap a single photo.

Soon, the White Trail connected with a section of the Red Trail, so we broke off in search of more game. Up another hill and through the brush, we saw the silhouettes of yet more buck, but when they scattered further up the koppie, our eyes followed them far enough to see a couple of giants: one male and one female giraffe. We just stood and observed them from a distance for a few moments, then ventured off the trail into the scrub for a closer look.

Both animals were wary of us as we slowly tracked up the hill. We would stop after every few steps to give them a chance to get used to us. Finally, I got within about 15-20 feet of the female as she grazed from a tall feeder. Jenny took a seat on the ground a few yards behind me. The male eventually sauntered over to the female, keeping me in his peripheral vision. I thought he might become protective, but I think he was just curious. After a few more minutes of agape amazement, we moved on.

Rounding a corner, we crossed another bike path and noticed a wider road off to the side. For some reason, my eyes followed the curve of the road and spotted movement just beyond the bend. It was a small herd of zebra — several adults and a couple of babies. Awesome. Once again, we left the marked trail and walked through the grass to see if we could get a better view.

A male on the outside of the herd, closest to our approach, noticed us right away. He was cautious, perhaps even a bit skittish, but he didn’t run away. Moving slowly, we again found ourselves within just a few feet of the animals, close enough to snap some decent shots, I think. It’s definitely the closest we’ve been to such creatures outside a zoo. Granted, these animals have become accustomed to hikers and bikers, but it was something special.

Continuing on the Red Trail, we spotted more kudu, more impala and several more bikers. Consulting our watches, and the map, we decided it might be best to turn around and head for the car instead of pushing on any further. Besides, they let the lions out of their cages at sundown. Or, at least that’s what I told Jenny. Guess she’d better hide. Like an animal.

Giraffe in the distance

Jenny’s feet after hiking at Groenkloof

More photos from Groenkloof Nature Reserve are available on Flickr.